Today, I wanted to make the Perfect Baked Potatoes in Oven to go on side of my Roast Beef Sandwich.  When I say Oven, I am talking about my Convection Oven.  I don’t use this feature much, but I am going to start using it more. So, be on the lookout for more Convection Oven Recipes.

Potatoes are a comfort food for me.  Some of my favorite potato recipes are mashed potatoes, baked potatoes, and potato salad.

What is Convection Oven Cooking?

You probably own a Convection Oven and don’t even realize it.  Take a look at your oven and see if it has the word Bake with a little fan next to it.  Go ahead I’ll give you a second…… You probably never noticed it before because we are used to hitting the bake and adjusting the temperature.  If you’ve never used your Convection Oven before this is the perfect recipe to try it out with.

If your oven doesn’t have a Convection Oven button they do sell them as a separate countertop gadget.  They range anywhere from $60 to $280 for a Countertop Convection Oven.

How Long to Cook Baked Potatoes in the Oven?

How to Cook the Perfect Baked Potato in a Convection Oven

I like to use Jumbo Russet Potatoes for Baked Potatoes.  Wash off each potato you are planning to cook.   Remember Potatoes grow in dirt and should be cleaned off otherwise you will taste grit. Melt 1 tbs of butter in the microwave for 10 seconds for each potato you are cooking.  I made 3 potatoes, so I used 3 tbsp of butter and microwaved for 30 seconds.

Add about 1 tbsp of coarse kosher salt to the butter mix together.  I used coarse kosher salt, but table salt is just as good.  Put the Russet Potato onto a skewer and pierce it through the middle. There is a video below to see how it’s done.

I used a Corn on the Cob holder to poke holes in the Potato, but you can use a fork if you don’t have them.  The corn on the cob holders is pointy and sharp they go in the potato easily. Brush the whole Russet Potato with a nice coat of butter and salt on the skin.  Place on a shallow pan like a brownie pan.  This allows the potato to be lifted off the pan because we are using the skewers.

The skewers are doing two things, one they are keeping the potatoes off the pan and letting the skin get crispy.  The second is they are getting heated from the inside because the skewers hold the heat. Here’s a video to see exactly how to make the Perfect Baked Potato in a Convection Oven.

Get creative try two different ingredients at the same time.  Perfect Baked Potatoes in Oven can be topped with just about anything or Nothing at all it’s that Delicious.  If you don’t believe me give it a try yourself and let me know what you think?

What will go with this delicious Bake Potato recipe?  Check out these Recipes….. 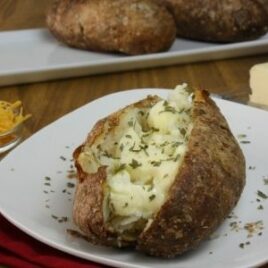